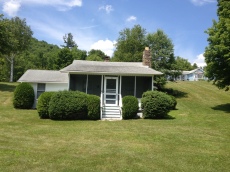 It’s time. The shades are pulled. The door is locked. I went in a little while ago. The air was stale and the porch furniture was piled up in the living room. The little summer cottage my grandparents built in 1940 is closed for good.

We have been keeping it going, patching it together, for a long time. It has been a summer destination for me for my whole life. I stayed there with my sister and my grandparents when I was little. I brought my children there as they were growing up, and spent July’s there with my two younger children for several summers. My sisters and their families, and my parents, have continued to come – summer after summer – for decades. It is nestled among several other cottages, occupied during the summer by various cousins, aunts and uncles.

On the front porch, which overlooks the Adirondack Mountains all around us, we have hosted countless happy hours and had many dinners at the picnic table. We have had lots of laughs and many tears. We have listened to music and crafted quilts. We have confronted hard situations, told important stories, and taken naps on the futon.

This little cottage, which we heated with a fire in the fireplace, and which smelled like a combination of smoke and mothballs, is no longer able to provide a summer home for us. The electrical service is vintage 1940’s, and the basement – if you can call it that – has had water ‘issues’ since it was built. Over the years, we have seen the basement full to the bulkhead with water, and watched water rush in during floods. We have hired someone to clean out the drain so the water would empty more readily, and hired another person to put insulation in the basement ceiling after one of our kids put her foot through the rotted floor above. (He fixed the floor, too)

We have been making plans to build a new house on this site – a house that would provide more bathrooms for our family, which can number over 17 when we’re all here; a house that would be available to us year-round; a house that would be water-tight and have enough bedrooms for most everyone to have a bit of privacy. It has been fun to think about and plan for this new place until . . . well, until we arrived this summer to find that the water pressure tank in the little cottage had broken off from the pipes completely (another flood), and the basement ceiling is so black with mold that no one thinks it’s safe to sleep in the bedroom above.

All of a sudden, our freedom to make the decision as to when we would take down the cottage, and when we would build a new house in its place, is not ours to make. It has been made for us. And with that loss of freedom comes a flood of sadness and loss and a jumble of precious memories of all the times we’ve had there.

So the goodbye-ing has begun. One last happy hour on the porch. The beginnings of conversations about what to save and what to throw away. And plans underway to figure out how to honor all the life that has happened there. It is a hard letting go right now. And while a new house – whenever it comes – will be fun to plan and inhabit someday, right now I am unfolding the grip in my hands and my heart . . . to let go.

Co-leader, “Listening for God: A Place to Begin”

To register or for more information: